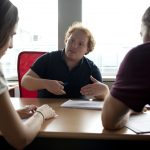 I am an environmental engineer graduated at the ENTPE Lyon with a specialisation on managing risks, pollution and nuisances. More precisely, I have specialised in the environmental impacts of transport infrastructures, such as the regional train network of Bourgogne Franche-Comté for SNCF Réseau (2016) or the Noisy- Champs train station, which is part of the Grand Paris Express project (2017).

I joined HM&Co for my last year of studies’ internship in April 2017 with the topic “Developing indicators for the environmental performances of the future Noisy- Champs station”. Since September, I continue to work on this topic as a research assistant.