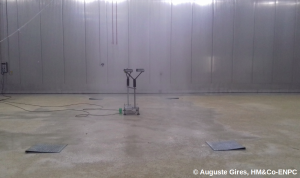 In the framework of the initial tests of the rainfall generation system of the Sense-City climatic chamber, HM&Co made available two disdrometers. The purpose was to assess the rainfall features in terms not only of rain rate and but also of drop size distribution. This measurement campaign took place in September 2017.

The figure below illustrates one test, where the steady features of the generated rain is visible. It also appears that drops tend to be smaller than during actual rainfall events.

A convention was signed between ENPC and IFSTTAR on June 2018 regarding the use of the data collected.