This project “Multi-Scale characterization of measured and numerically simulated rainfall spatio-temporal variability” was a collaboration between HM&Co and the “Environmental remote sensing laboratory” of EPFL.

Outputs of COSMO (the operational MeteoSwiss model) simulations performed over Switzerland were compared with the help of multifractal tools to observations by the MeteoSwiss radar network. It enabled to characterize better the ability of the model to reproduce the spatio-temporal variability of precipitation observed on data depending on the type of rainfall event. For more info see Wolfensberger et al. 2017. 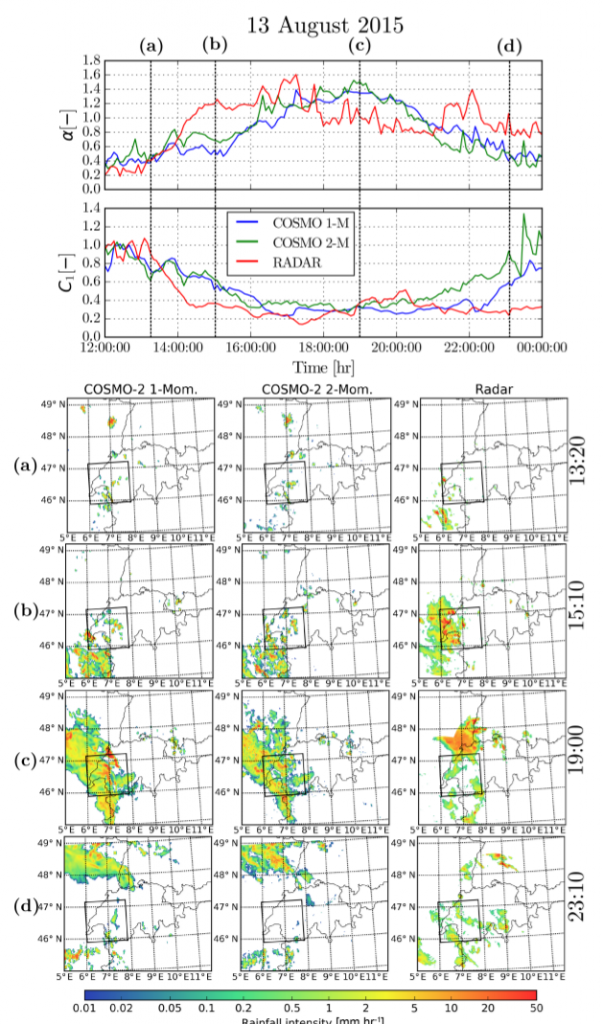 Taken from Wolfensberger et al. 2017. The upper panel displays the temporal evolution of characteristic Universal Multifractals parameters during a studied convective rainfall event (13 August 2015). C1 is the mean intermittency co-dimension, which measures the clustering (intermittency) of the (average) intensity at smaller and smaller scales (C1 = 0 for a homogeneous field);  alpha, the multifractality index (0<alpha< 2), which measures the clustering variability with respect to intensity level.
The lower panels (a, b, c, d) show the spatial structure of simulated and observed precipitation fields during four different time steps (13:20, 15:10, 19:00 and 23:10 UTC)

In addition the precipitation variability was analysed at smaller scale through the reconstruction of of snowflakes distribution over of 2D video disdrometer installed in Davos during winter 2014/2015. A multifractal behaviour was identified for snowfall down to 1 m in space and one minute in time. Fully characterizing the behaviour at smaller scales would require the development of new instruments. For more info see Raupach et al. 2017.

Taken from Raupach et al. 2017. Snow mass per box and per column, for two studied event, showing the difference between reconstructed and homogeneously distributed particles. In the reconstructed fields, the particles falling toward the 2DVD over time are visible as oblique patterns.

Exchanges were funded by Campus France under the framework of a Germaine de Staël – Hubert Curien partnership.
It resulted is two published papers :