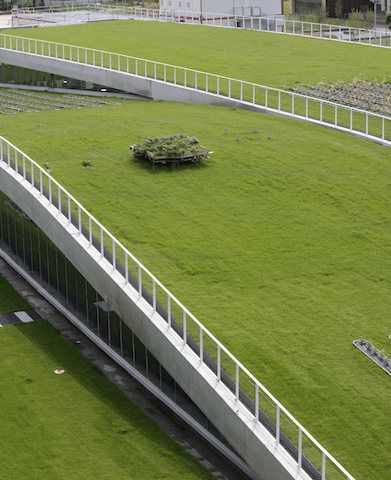 The Blue Green Wave (BGW) pilot site is located in the heart of the Paris-East Cluster for Science and Technology, in front of Ecole des Ponts. Since 2013 and the Blue Green Dream project, several monitoring campaigns have been conducted to better understand the thermo-hydric behaviour of this large (1 ha) wavy-form vegetated roof.

The data collected are also used to characterise the spatio-temporal variability of the measured hydro-meteorological variables that usually exhibit a significant variability in space and/or in time characterised by a non-gaussian distribution and a scaling behaviour.

Objectives of the current experiment

Since 2017, a large scale continuous monitoring of the BGW water balance is in progress through the development of the multi-scale Fresnel platform at Ecole des Ponts :

The collection of these data is interesting for several scientific objectives: 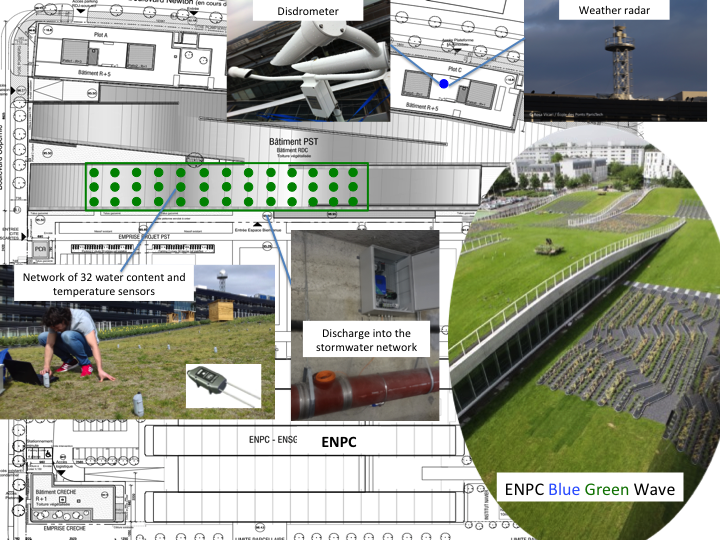 Some results and perspectives

Measurements of precipitation (with disdrometer, top), volumetric water content on one slope of the Blue Green Wave (32 Wireless TDR Sensor, middle), and discharge in the stormwater network (bottom) for a particular rainfall event are presented in the video below. Huge variability of the water content values is the result of combined influence of slope and heterogeneity that will be the subject of future research.

Additional experiments are planned on the GW in the framework on the ANR EVNATURB project that deals with ecosystem performances of Blue Green Solutions (BGS), and especially focussed on thermo-hydric fluxes.

In addition, some experiments warried out in lab (in collaboration with Navier geotechnical laboratory) to assess the geotechnical and hydraulic properties of the BGW substrate. Here are presented some results obtained with a X-ray tomograph.

The objective of this work was to show how the grey-scale image(s), scanned by means of a X-ray CT, can be used for predicting the grain size distribution (GSD) of the investigated granular material. The image presented here (download) is a single two-dimensional horizontal slice taken from the full three-dimensional image of the specimen containing the Green Wave substrate. The scaling behavior of this image is analyzed using the Universal Multifractal (UM) framework, as demonstrated in the main Matlab code (‘ MainCode.m ’), and based on the obtained results the GSD is predicted. For determining the UM parameters that characterize the analyzed image, the Trace Moment (TM) technique is performed. This function (‘TM_Analysis_function.m’) is called from the main code. In order to validate this approach, the results of the model are compared with the experimental GSD data (‘GSD_experimental.mat’), which is also illustrated in the main code.