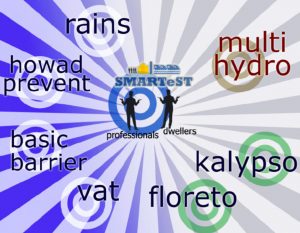 The EU-FP7 Smart resilience technology, systems and tools (SMARTeST) project was initiated to improve the Road to Market of innovative Flood Resilience (FRe) technology by reducing deficiencies and obstacles in the implementation of FRe measures, hence facilitating the design of more holistic flood defence systems and supporting the implementation of the new EU flood risk management policy of Living with Floods.

SMARTeST involved 13 leading institutions in this subject from 10 European countries. Through a collaborative research new technology and tools were developed that performance was tested by experimental studies to determine their reliability and develop new guidelines for employing flood protection systems. The research findings were applied and adjusted to urban areas of the European cities of Athens, Delft, Hamburg, Manchester, Paris and Valencia, being most vulnerable to pluvial, torrential, fluvial and estuarial floods and exposed to different topographic, climate and societal conditions. The impact on vulnerable existing buildings and structures, including historic heritages, were a key element of the research. All case studies were built on pre-existing projects, hence sustained interactions between stakeholders and communities were already in place. The participation of key public and private partners, who also contributed via the national support groups, increased the scope, depth and breadth of the project. National and regional issues were addressed with the need for adaptation under national legal and institution environment investigated and examples for implementing them in the context of the new EU flood risk management instruments and safety standards. SMARTeST toolkit (from: Final report (2014))

In overall, the FP7 SMARTeST project permitted EU partners to learn from each other and to investigate, develop, implement and disseminate a range of methodologies that enable more scientifically sound transfer to flood resilient cities. Indeed, a huge part of this project was devoted to the improvements of methodological assets that were initially developed in natural environment, in particular implementing novel modes of data acquisition for flood risk modelling, and evaluating the systemic aspects of FRe-technologies. The above Figure displays a symbolic presentation of the SMARTeST toolkit that had integrated the individual FRe-tools of different partners. All these new FRe-tools have been expected to solve some operational problems, where the traditional tools and methods prove to be insufficient or even unsuitable. Among the tools, Multi-Hydro allows solely to evaluate hydrological impacts from newly-installed or, even, from potentially implemented FRe-technologies at different scales. Multi-Hydro has been developed as a hydrological model suite to study the impact (positive and negative) of introducing FRe-technology in urban areas and help decision makers to be better informed about benefits and limits of FRe. The lessons learned from the Multi-Hydro applications on five very different case studies, having an increasing level of complexity, could be found in Salagnac et al (2012).