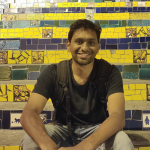 I start my PhD in October 2019 at HM&Co lab at École des Ponts ParisTech entitled ‘Can we characterize the climate in an environment chamber?’ My research is supervised by Daniel Schertzer and Auguste Gires from HM&Co, and Yelva Roustan from CEREA; and is in collaboration with Sense City urban innovation lab, IFSTTAR under supervision of Anne Ruas. Before my PhD, I have been working as a researcher in Cloud Aerosol Interaction and Precipitation Enhancement Experiment – CAIPEEX where airborne aerosols were collected and analysed for studying their morphology, mixing state, and relation with cloud microphysics towards formation of Monsoon rainfall over Indian subcontinent.

My main research interest is in comparison and quantification of gap between real and simulated weather conditions for various geophysical fields using multifractal framework.