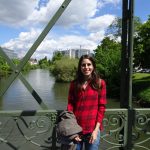 I started my PhD in October 2016 at HM&Co entitled “Multi-scale analysis and inter-comparison of different rainfall radar products” supervised by Daniel Schertzer and Ioulia Tchiguirinskaia. Before the beginning of my PhD, I had been an intern at HM&Co for six months in the framework of my master in “Water, soil and waste management and Treatment” in ParisTech working in a case study in Le Perreux-sur-Marne, situated in greater Paris region. During my internship, I had been working for the first time in high resolution spatio-temporal hydrological modeling at the district area of Le Perreux-sur-Marne using the Multi-Hydro platform. This internship was under the framework of Trafipollu project proposed by ANR (the French National Agency of Research).

My main research interests concern the multifractal theory and especially the Double Trace Method, the various radar products (mostly from X-band radar) and their comparison with other type of radars (mostly C-band which are used for meteorology) and high resolution spatio-temporal hydrological modelling.