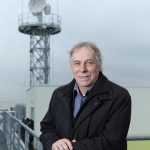 Daniel Schertzer is professor of Ecole des Ponts ParisTech, director of the Chair “Hydrology for Resilient Cities” (sponsored by Veolia). He graduated from Ecole Polytechnique and Ecole des Ponts. Among public services: Union Councils of the AGU (2013-now) and of the EGU, (2005-2009), EAWE Executive Board (2012-now), CNFGG vice-president (2011-now). He co-advised 22 PhD theses and is presently advising 4 PhD theses. His publications include: 1 book, 2 edited books, 150 papers indexed by the Web of Science with a H factor= 36 and 5020 citations (H= 50, i10= 146 and 9590 citations in Google Scholar). There are a few dozens chapters in other peer reviewed books. Recent research projects: Intereg RainGain, IdF/RadX@IdF, Climate-KIC/Blue Green Dream, WMO/TOMACS. He was nominated AGU Lorenz Lecturer (2008),  EGU Lewis Fry Richardson medal (2014) and was awarded the Paris City Silver Medal (2009).

He introduced multifractals and related techniques in hydrology, after having contributed to their development in turbulence, in particular with the definition of a co-dimension formalism, the concepts of generalized scale invariance and universal multifractals. He also contributed to development of the Fractional Fokker-Planck equation. His research works covered many domains of geophysics and environment, although with a particular emphasis on atmospheric dynamics, precipitations, extremes and remote-sensing techniques. One may note a model of stratified turbulence of dimension 23/9 and the genericity of power-laws for geophysical extremes.

Directions of work or proceedings1 document